"This fact-based period drama about a system-fighting Brazilian psychiatrist won the Audience award for best fiction feature at the recent Rio festival."

"It was a perfect film. There were absolutely no needs for cutting and none of the roles were ambiguous. Particularly, the patients with mental disorders were brilliant in the film. I think that this is something extremely difficult to express through performance but watching their emotions and their struggles, I felt that they were truly magnificent.

"This is a classic against-all-odds emotional journey - though that scriptwriting cliché is sometimes pushed to an excess."

In the 1940’s, the Doctor Nise da Silveira leads a revolution in psychiatric care in Brazil. Her weapons: canvases, paints and brushes. Among her faithful allies; cats and dogs.
Dr. Nise da Silveira is back at work in a psychiatric hospital on the outskirts of Rio de Janeiro and refuses to employ the new and violent electroshock for the treatment of schizophrenics. Ridiculed by doctors, she is forced to take the abandoned Sector for Occupational Therapy, where she starts a revolution through paints, dogs and love. 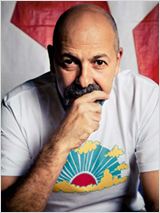 His work has been screened and awarded in festivals such as IDFA, AFI, Tokyo and San Francisco. In 1993, he founded TvZero that produces all of his work.